Ask most any lawn care person what their biggest pet peeve is and they’ll answer, “People who don’t use coasters. Don’t they know their cups leave little circle marks on the wooden furniture???” Lawn care people are a refined, courteous bunch.

If you’d ask them what’s the question they get asked most by customers is, “Can your spray kill my crabgrass?” Lawn care people also get annoyed when people don’t use your/you’re correctly, but that’s another issue.

We’ve found over the years that “crabgrass” isn’t always, or even usually, actual crabgrass. This blog will highlight many of the more common grassy weeds found in lawns and turfgrass in the Upper Midwest, and the two most common ways to eliminate them. And (SPOILER ALERT), neither are probably the answers you’ll want to read. According to NDSU, Crabgrass is technically a warm-season annual, which means each year the specific plants grow and die. It also means they start to grow as the lilacs begin to bloom – so usually that will be late May to early July. Crabgrass does not appear early in the season, so you are not battling it in the Spring. Since crabgrass waits to germinate, there are some products that claim to be “crabgrass killers” – pre-emergent herbicides. As a licensed, commercial applicator, we do not use pre-emergent herbicides due to the narrow conditions under which they need to be applied in order to be effective. If a homeowner or customer wants to apply pre-emergent herbicides themselves, we strongly encourage customers to read the label directions very carefully and follow as closely as possible – lest you end up with crabgrass anyway and it’s a waste of your time and money. Some lawn care companies advertise the ability to use pre-emergent that will target Crabgrass and most of the time even charge you extra for it. Due to the inconsistent results we have decided as a company not offer the service as it mostly gives customers false expectations.  We would rather see people invest in thickening their lawn to reduce the growth and spreading of grassy weeds. 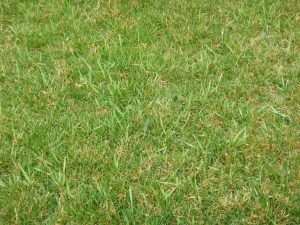 The REALLY tricky one is QUACKGRASS. Quackgrass is also a grassy weed, but grows and behaves much like our desired turfgrass of choice – Kentucky Bluegrass. Quackgrass is a perennial, so it’ll continue to come back from dormancy year after year. It uses rhizomes to spread out and grow using a network of nodes, so individual quackgrass plants are interconnected. It makes quackgrass extremely difficult to eradicate because if any of the root or rhizome is left unpulled or undead, it’ll grow back. Quackgrass is the most troublesome of all our grassy weeds due to its similarity to Kentucky Bluegrass. We’ll get to how to eliminate it at the end of this post. 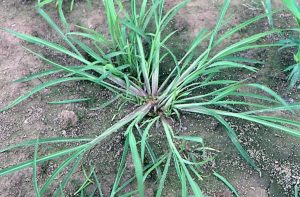 The third most common grassy weed with which we battle is Barnyard grass. Yes, it sounds a bit pastoral, but that’s its actual name. We have a couple other blog posts regarding Barnyard grass. Barnyard grass, like crabgrass, is an annual, and it likes to germinate even a little bit later than crabgrass. We tend to see it flare up in early August when our soil is warmest and driest. It is extremely easy to identify as it has a very recognizable purple-tinge to the base of its blades. It also typically grows in a prostrate fashion, which means it spreads out horizonally across the ground as opposed to vertically like most grass. This is a defense mechanism so it doesn’t get cut as easily and so the barnyard grass is more able to go to seed. There are some chemical treatments that are able to target barnyard grass, and our customers who have our Deluxe (4-treatment) plan get a special spot-treatment during the 3rd round. 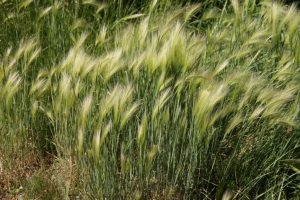 We also combat some Foxtail and others, but most grassy weeds are eliminated using one of two methods. Read on to find out!

As I mentioned earlier though (SPOILER ALERT), I don’t expect most readers will appreciate the two main methods to eliminate grassy weeds. Unfortunately, since grassy weeds are so genetically similar to Kentucky Bluegrass, there isn’t a magical chemical or treatment that will target all grassy weeds and not kill your good Kentucky Bluegrass. If anybody does develop that magical elixir or selective herbicide, please let us know as we’d love to become millionaires with you.

Grassy weeds are best eliminated by these two methods: 1) using a “non-selective herbicide” like Round-Up that simply kills anything it touches, and starting your lawn over from scratch. This would be the more complete and quicker option, but more expensive. A seeding or landscaping company would likely want to do two rounds of Round-Up, till up your soil, re-final grade it, and then either seed or sod. Or, method 2) aerating and overseeding several times to “choke out” the grassy weeds with good Kentucky Bluegrass or Fescue, depending on how much sun and shade your lawn gets. This method takes much longer as each round needs 6-8 weeks to germinate and establish, and the grassy weeds are able to continue to live while it’s happening. However, it is less expensive than starting over from scratch.

In conclusion, grassy weeds are the bane of lawn care peoples’ existences. It is a battle we fight constantly, and we wish we had different weapons.